Please click anywhere in this text to see a copy of our letter to the Council with our views about what’s right, and what’s wrong with the its proposals.

Find out what you need to know and how to respond by clicking on the text below for the two pages of our latest Newsletter:

We made a series of presentations on the Masterplan on October 5 2015 – please click anywhere in this text to see and hear the recordings of them.

We have a Masterplan! Here’s what is happening and how it takes forward our vision for a better Guildford town centre.

Please click on the text below for the two pages of our October 2015 newsletter update to find out more:

GVG welcomes the town centre masterplan and congratulates the council

What was clear was that there was general agreement about a lot of aspects of regeneration of the town centre and that we really need to engage with the Local Enterprise Partnership (EM3) to help us direct funding.

Clearly we have been missing out in the absence of a Local Plan and of specific schemes for bringing forward highways and transportation improvements.

The need of a new crossing of the river and railway was discussed and generally welcomed.  Julian Lyon asked Ms Mordaunt if the Government could explore the potential for some equivalent rights to Compulsory Purchase Orders to be provided to local communities separated by railway lines.  This is not just a Guildford issue but we feel the railway barrier particularly strongly in our town centre.

There was discussion about the merits of the creation of a Neighbourhood Forum rather than an Urban Development Corporation and this may be a sensible approach to master planning the town centre ahead of the Local Plan.

The Guildford Society and Guildford Vision Group thank Penny Mordaunt MP for her attention and objective advice to help bring about our desired regeneration of the heart of Guildford.

To assist with their public engagement, Solum are inviting responses to a flyer that has been delivered to some local residents and will also be holding public exhibitions on:

The planning application is a complex document; it needs careful study. In advance of the public displays, Solum’s planning statement,  other documentation, drawings, photographic and viewpoint projections can be seen by visiting the Planning section of Guildford Borough Councils website .  click here :

‘GVG is calling for a development body, with appropriate powers, to drive implementation of the Town Centre Vision, on which consultation finishes today.

In its consultation submission, GVG is also calling for a new Bridge Crossing, linking Farnham Road with York Road. GVG emphasises that the principal purpose of the GVG Bridge Crossing is to deliver comprehensive town centre pedestrianisation and the emancipation of the riverside, for everyone’s benefit.’ 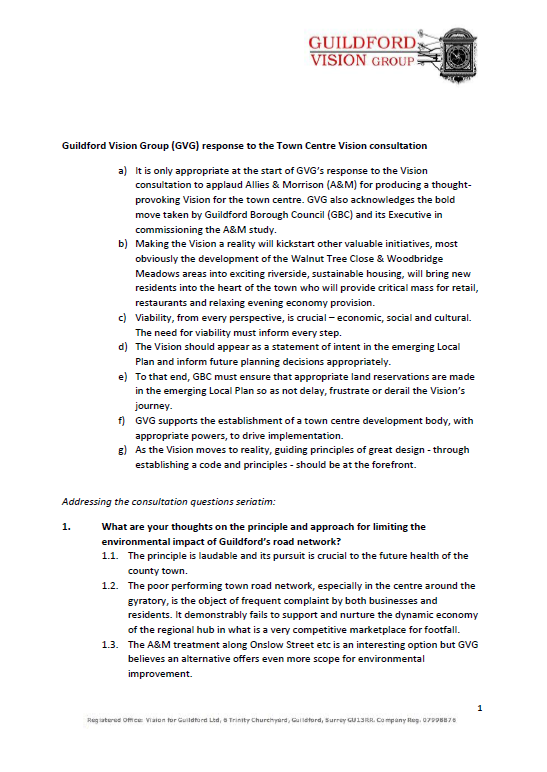 Attended by over 250 people, questions and statements suggested very good support for the bridge concept, although considerable technical and exploratory studies will be need to fully test it. Here’s a recording of the Q&A session from the meeting. 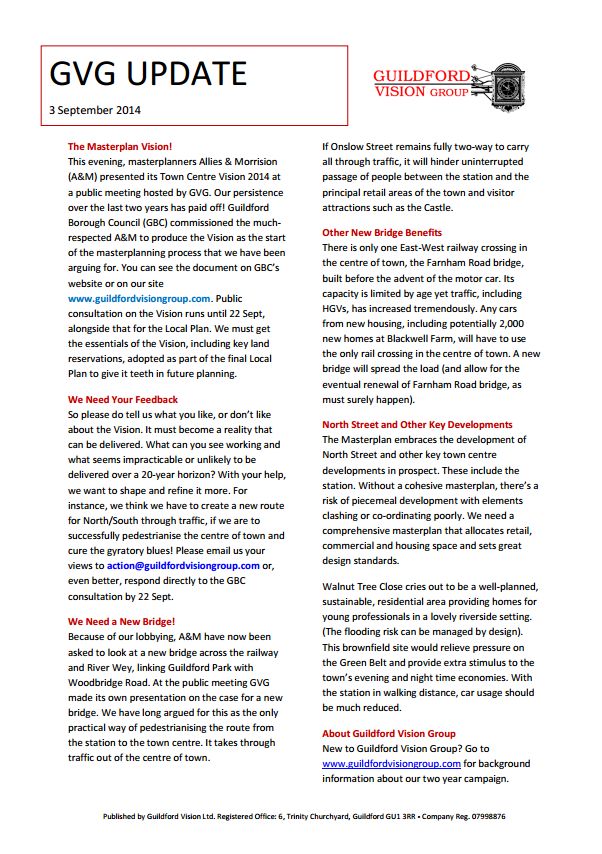 GVG June 2014 Newsletter – We have a Master Plan Vision

1.      Click on this link to access the GBC Press Release which contains some very exciting news for our town and this is exactly what is right for Guildford.

GVG views this as a very positive step and we urge you to continue to stay in touch with the development of the Local Plan which should be drafted in late Spring.   What does this mean?  We are hopeful that Allies & Morrison, highly experienced and highly regarded Master Planners, will identify tangible solutions for Guildford for the short and long term which include long overdue updating of:   traffic & transport,  housing provision, retail expansion, heritage & culture, arts and entertainment.

Once the vision document has been completed in May, this is where you will, once more, have an opportunity to ‘have your say’ and we will keep you informed of developments.

A Vision for Guildford in 2030 and beyond: Guildford on the Way

Guildford Vision Group has published its vision document to help frame discussions on what Guildford should be like in the future.

Guildford on the Way – A Vision for Guildford in 2030 and beyond To be read in conjunction with Annex Document :

Guildford on the Way – Annex document to: A Vision for Guildford in 2030 and beyond

Complete a postcard of your own here

The furore that has burst around unfortunate remarks by the Leader of the Council followed a simple request from Guildford Vision Group (GVG) that Guildford Borough Council (GBC) take legal advice about the need for public consultation.

GVG was simply exercising its democratic right to asks questions of the Council. Ironically, the question was about a document on public consultation on major planning matters on which GBC has chosen not to publicly consult. On Thursday evening, 20 June, the Guildford Borough Council (GBC) Executive adopted two core statutory documents in relation to the new Local Plan process. One was the Local Development Scheme (LDS), the other the Statement of Community Involvement (SCI). The latter document – called ‘Community Involvement in Planning’ by GBC – sets out how the Council will consult and involve residents in creating the Local Plan and related major planning matters.  The SCI included a small but important number of changes to the previous version (adopted in July 2011 following public consultation). The changes have been driven by the Government’s new National Planning Policy Framework as well as its Localism agenda which spawned key statutory Regulations introduced in April 2012. All local councils, so far as GVG can establish, have complied with the 2012 Regulations by inviting public consultation on their new or revised SCIs. Ahead of the Executive meeting, GVG therefore asked that GBC seek its own legal advice on the public consultation point. GBC did confirm, a few hours before the Executive meeting, that it had been advised that ‘no express statutory duty to consult’ existed. Having asked the council to point to other examples of SCIs being adopted without consultation, none have been provided. “We just asked the question, concerned that GBC was not following the consultation route adopted by other councils,” said John Rigg, chairman of GVG. “We made no ‘threats’, so the reaction of certain councillors at the meeting is mystifying. In our letter we did point out the history of past poor advice to the Executive on the requirements of the 2012 Regulations. Indeed, the current Executive, whose views we share on the need for exciting growth and new development, came into being as a result of GVG’s past intervention. Good growth needs good governance and GVG will continue to question GBC ‘s actions whenever we see the door being opened to bad development.”

GVG remains concerned that any planning policy documents subsequently adopted by the Council that rely on the new SCI might not be robust, and thus open to challenge by developers. This could include any document intended to form part of the new Local Plan which the council is about to promote. Another concern of GVG is that the un-consulted LDS fails to include separate Local Development Plan documents (Area Action Plans) for areas earmarked for regeneration, including the Town Centre and Slyfield. Public comment and shaping of any scheme may therefore only be available at the much later planning stage, when the ability for the community to influence is much reduced without recourse to the Courts.GVG made informal approaches to the Council last Tuesday which received no reply, and so sent their own letter to the Council’s (interim) Head of Legal raising these concerns. The Council’s much feared ‘avaricious’ developers will certainly circle if the new Local Plan documents setting out the development, scope and planning regime for the Borough, omit key areas or are found to be not fit for purpose as a result of inadequate process.

-Ends- Notes for Editors
1. Re the SCI: these amendments are needed as the Localism Act and the National Planning Policy Framework have significantly altered the planning regime in which the council have to operate. Regulations introduced by Parliament and applying from April 2012 specify how local plans as widely defined in the regulations are to be introduced
2. It is interesting to note that a late additional recommendation to the Executive by officers was accepted at the meeting on Thursday and gives approval to ‘make such further minor amendments..[fusion_builder_container hundred_percent=”yes” overflow=”visible”][fusion_builder_row][fusion_builder_column type=”1_1″ background_position=”left top” background_color=”” border_size=”” border_color=”” border_style=”solid” spacing=”yes” background_image=”” background_repeat=”no-repeat” padding=”” margin_top=”0px” margin_bottom=”0px” class=”” id=”” animation_type=”” animation_speed=”0.3″ animation_direction=”left” hide_on_mobile=”no” center_content=”no” min_height=”none”][to the SCI]..as [they] may deem necessary’ without committee approval
3. Public consultation is also a particular issue with the Local Plan documents in the LDS, where they are subject to independent examination and scrutiny by the Secretary of State. At worst Local Plan documents could be held invalid, and frustrate the Executive’s ambitions for the Borough; again, ironically, ambitions shared by GVG
4. Guildford Vision Group (GVG) was formed with the sole purpose of promoting Guildford’s urgent need for a long term vision in which the sustainable vitality of the town and its enterprise is ensured for the next 30 years and beyond. GVG is independent, and has no political affiliations or vested interests
5. Further information available at www.guildfordvisiongroup.com
6. Contact: Yvonka Wilkinson, Campaign Manager, Vision for Guildford Ltd on 07767 251040[/fusion_builder_column][/fusion_builder_row][/fusion_builder_container]