Statement of Facts and Grounds

Guildford Vision Group has responded to the Consultation Draft Scoping Report for the Local Plan and its corresponding Sustainability Analysis prepared by URS on behalf of Guildford Borough Council.

If you think the first paragraph of this post is long-winded and unapproachable, just take a look at the document in question here!

After a consultation period, yet again spanning the Christmas holidays, Guildford Vision Group has highligbhted some serious shortcomings in the document – much of the problem stemming from a lack of structured and holistic planning, a failure to fully grasp the issues of transportation and some selective references to the Evidence Base.

You can read our Response to Scoping Document here.

Whether you are a town centre business; a school; higher education facility; communty, church, youth, cultural group,  who would like to know more about how a master plan can make Guildford a world class city, please contact us at : action@guildfordvisiongroup.com or telephone : 07767 251040 and we will arrange to come to a place of your choice to present our Campaign.

Our presentation can be tailor made to suit your audience including a workshop or Q&A forum and we will prepare a specifically designed timetable for your group.

Guildford Vision Group this evening sent the attached document by email to each member of the Planning Committee:

This is by no means an anti-Waitrose objection; we simply believe the wrong development on the wrong site could break the fragile traffic system in Guildford.

The application will be heard at the Planning Meeting tomorrow (6th November) at Guildford Borough Council.

Guildford, Monday 5 November 2012: The quality of GBC planning advocacy is again being called into question. Scrutiny of the expert traffic advice for the Waitrose store application before GBC’s Planning Committee tomorrow night (Tuesday, 6th November) shows that council officers have not revealed the full traffic congestion impact of the proposed development in their recommendation for approval.

GBC planning officers state that any congestion caused by the additional traffic is not likely to be ‘severe’ enough to make a case for refusal.

But in making that judgement, there’s one key assumption that really should be challenged. The assessment of traffic flows west out of the site towards the York Road/Woodbridge Road roundabout assumes that the traffic has an uninterrupted flow along Onslow Street into the gyratory system. END_OF_DOCUMENT_TOKEN_TO_BE_REPLACED

On Tuesday 6th November the Waitrose Application (12/P/01020) comes up in front of the Planning Committee in Guildford.

The following email was sent today to all Councillors:

Dear Councillor
Re: Waitrose Application 12/P/01020
For councillors interested in the Waitrose debacle, John Rigg’s letter in the Dragon reflects many of the 183 objections.  It also makes clear that we are keen to see Waitrose and John Lewis in the town and want an exciting new vibrant town centre; we simply don’t want an out-of-town format Waitrose on the Bellerby site.
Guildford deserves better planning, so the overriding question is: how can the Council grant consent to Waitrose, when Appendix 4 of the now defunct Guildford Interim Town Centre Framework Document (withdrawn within the last six weeks) lists the key evidence outstanding to guide all town centre development?
(A copy of the Table from Appendix A is attached)
These missing documents are fundamental to decision-making on significant applications. If they are going to be available in the next few months, how can this Waitrose application, with potentially terrible consequences, be waved through on this residential site?
Would the officers of any other local planning authority recommend the grant of such a consent whilst awaiting the imminent delivery of key documents?  It invites the question whether the planning officers would do so here but for the pressure of a sale contract or the authors of the project.   If this Waitrose application is not rejected on the basis of prematurity, the door is wide open for developers to advocate their schemes relying on the existing markedly incomplete and out-of-date evidence base.
Vision for Guildford Limited
NB: Guildford Vision Group remains committed to its single purpose – to see the involvement of professional masterplanners in the creation of a visionary plan for our town that fits it for its role as the major regional hub, and that secures its lasting future. 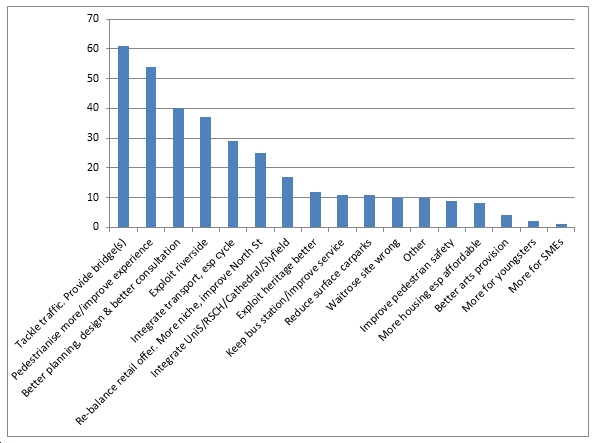 A big thank you to everyone who came to our open workshop today (which turned out to be even more open than planned – outside St Marys church off the High Street on a beautiful day).

A lot of excellent feedback – all comments matter and will be gathered together to provide a record of the event and will be used to help inform us of our next steps. We will also make sure that the Council has a set of data and we hope that they will recognise the value and, frankly, the need for a wider, more comprehensive exercise.

Allies and Morrison gave their time to us and John Rigg organised with them to produce some excellent graphics which served to show some examples of just what could be possible with the wider community and with proper professional master planners.

Thanks once again to you all and to our volunteers and to St Marys.

Press Release : Lets work together and plan a shared vision for Guildford

“Council Will Be Acting Unlawfully If It Adopts Town Centre Plans”

“Council Will Be Acting Unlawfully If It Adopts Town Centre Plans”

An Opinion from a Leading QC has cast significant doubt on the lawfulness of two key town centre plans.

This afternoon, lawyers for Guildford Vision Group (“GVG”) presented the Council with an unequivocal Opinion which warns that the Council could be at significant risk of legal challenge if it adopts the Interim Town Centre Framework or the North Street Design and Development Brief. GVG has also obtained a second Opinion from another QC which supports this conclusion.

GVG has repeatedly sought to engage the Council in collaborative discussions but was left with no other option when it became clear that the Council intended to adopt both documents at its Executive meeting this evening.

GVG believes that the existing Town Centre requires significant and comprehensive masterplanning in order to realise the Town Centre’s potential and sort out its traffic problems. Initial plans by Allies & Morrison, to be available on the GVG website, propose the removal of traffic from the much-maligned gyratory system, the re-routing of traffic around the Town Centre and a new bridge across the railway.

John Rigg, a Director of GVG, said “We believe that the Town Centre has enormous potential and we urge the Council to work with GVG and others for the benefit of all Guildford residents”.

Notes to the Editor:

Guildford Vision Group gives its views on the Interim Town Centre Framework and the North Street Development Brief ahead of the adoption of these documents by the Council’s Executive Committee on 6th September 2012.

The slides presented at that meeting are available here.

Comments are welcomed.  Please say whether you attended the session or not.